We've called Beaufort, SC, home for the past three weeks. It has been a good stay. While we are basically in quarantine mode wherever we go, Beaufort has welcomed us with its beautiful water views, good takeout and InstaCart service, a walkable waterfront, quaint downtown, and a small, friendly marina. All very nice. We also rented a car a couple times to see more of the area -- Lady's Island, Bluffton, Hilton Head. But the highlight of our stay? We got a good look at the historic conjunction of Jupiter and Saturn on December 21 and 22. And it was cool.

We wondered if we would be able to see it at all. Much of the East Coast north of us has been dealing with real winter. We didn't see any snowflakes here but the gloom and rain we did get would have spoiled the stargazing. Fortunately, clear skies returned for solstice.

Not long after sunset, pink still on the horizon, I looked up from our aft deck and there was a single bright pinprick of light in the evening sky. I am no astronomer but I knew it had to be it. Mark grabbed the binoculars for a closer look, and that's when the magic happened. That lone little twinkle was, in fact, two little twinkles. Two separate planets cozied up to each other in seeming defiance of the several hundred million miles that still separated them. Jupiter shone brighter than Saturn as it is "closer" to earth, but both were mere specks.

Specks or not, for us earthlings it felt like a celestial extravaganza, a sign of hope for better days ahead. It certainly gave new meaning to the phrase, "when the stars line up." And the next night we got to see it all over again. 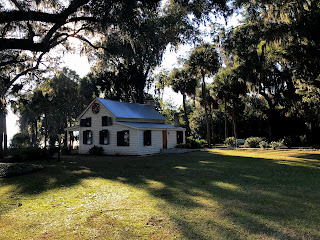 The Garden-Garvey House on the May River in downtown Bluffton, SC, was owned by freed slaves. 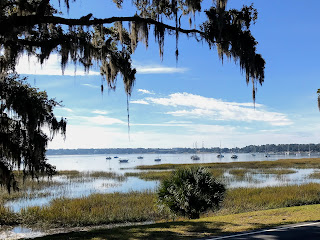 We're lucky to have such gorgeous views from the boat and marina. 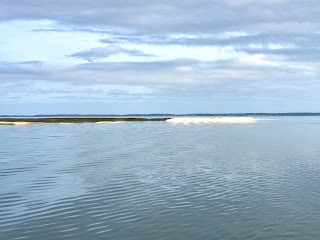 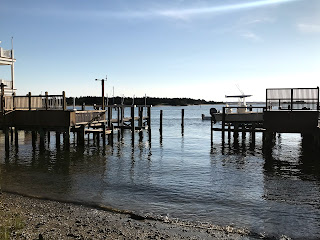 A couple nights at Beaufort Docks Marina and we'll be off again. But what a fun stop, if only a brief one.  Beaufort feels like it's sitting on the edge of a watery world, with the southernmost point of North Carolina's Outer Banks just around the corner. While technically not on the ocean, the Atlantic is close at hand and it shows. Local marinas are full of huge sportfish boats at the ready. Knowledgeable boaters have first-hand experience with the troublesome winds and currents that define these waters and the nearby inlet takes boaters out into the big water. We've seen more active boating around Beaufort than in any one spot on our journey thus far. Then there's the deep history that makes Beaufort a treasure for anyone who is fascinated by how the past has helped form the present. The infamous Blackbeard made his home here in the early 1700s before meeting his demise in a naval battle not far from today's waterfront. His house is still here, privately owne
Read more 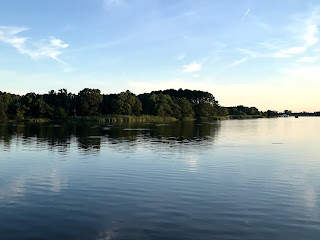